You can stand under my umbrella

Brightly coloured umbrellas have returned to a Liverpool city centre street and although you can admire the beauty of this project you might not know the wonderful reason behind it.

So let me explain. This fantastic display is part of an initiative to raise awareness of Attention Deficit Hyperactivity Disorder (ADHD) and autism.

Devised by ADHD Foundation, the Umbrella Project launched June 28th over Church Alley (in front of the Bluecoat), and celebrates the gifts, talents and employability of those with ADHD, autism and other neuro-developmental disorders. Every umbrella has been signed by a child stating ‘My Super Power is….’ as part of a wider education programme with participating schools St Sebastian’s and St Cuthbert’s Catholic primary schools, Dovecote Primary School, Clare MountSpecialist Sports College on the Wirral and Pontville School in Ormskirk. 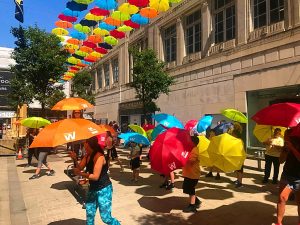 “ADHD and autism are ‘umbrella terms’, hence the Umbrella Project was created back in 2017. We were overwhelmed by the reaction it had last summer – and it is by popular demand that it is back in 2018!

“The objective is to highlight the skills and “super powers” of children with neuro-developmental disorders – society’s “invisible disabilities” that can lead to unfair stigma and prejudice.”

So now you know… spread the word!

24 hours after my first treatment I can report my skin looking fabulous and I have spent the last 30 minutes thinking about getting back...

It's getting close now. Almost time for Ladies of Liverpool season 4 and I am really looking forward to chatting to YOU! Could you...

From beauty queen to Big Brother bully, what’s really gone on behind the scenes? With no questions dismissed or avoided, hear...

This week let’s get to the bottom of weight loss! Hear from an ex-international British gymnast who represented her country all over...